Listen, learn and leverage local, cultural, traditional, agricultural and artisan techniques that can potentially contribute to the improvements of families' household economies.

For millennia, the indigenous horticulturalists and the upper Amazon highlands have cultivated naturally pigmented Pakucho (their own Inka word for “brown cotton”). Plants may grow for several years, reaching 5 or more meters tall, and resisting pests and diseases in a naturally organic farming system. Many food, craft, medicinal and decorative plants share space with Pakucho cotton in garden plots and small fields clinging to the hillsides.

Women hand harvest enormous bolls of long staple fiber they sort into various shapes to spin and weave bags, belts, blankets and many other domestic cloth articles. Our field work since 1984 has led to the recuperation of this ancestral cotton which in recent years attained record production levels of thousands of tons of Pakucho fiber in natural colors. For thousands of years the noble Alpaca roamed the Andes where they were first domesticated about 8,000 years ago by hardy pastoralists living above the tree line some 4,000 meters (12,400 ft) above sea level. While shearing, they select and sort dozens of naturally pigmented colors of this unique, very fine and thermally protective hair (fiber). The natural colors have begun to disappear as industrial demand by large firms requires predominantly white fiber that conveniently can be dyed to simulate the natural colors, often disguised behind catchy names and marketing campaigns. Herders in the highlands where good pasturage and clean water are very scarce, are often obliged to sacrifice the colored alpacas to increase all white herds.

We launched the first collection of black baby and royal alpaca yarns that were exported to Japan with great acclaim. For millennia ancient societies have used copper to purify liquids, disinfect wounds and pipe drinking water to households, while millions of people attest to the value of copper bracelets to mitigate pain from arthritis, rheumatism and stress. Leveraging this traditional knowledge and practice, Naturtex created Qoperfina®, an intimate blend of organic cotton and alpaca with micro fibers of pure copper metal. Prestigious North American physicians like Dr Sanjay Gupta, have extolled the properties of this unique blend of ancient with modern, an avatar textile creation for human health and wellbeing. The Shipibo-Conibo live in the Upper Amazon jungle of eastern Peru where for millennia they have developed their own textile crafts, spinning and weaving a unique Amazon kidney cotton. Female artisans dye the fibers in homemade clay pots using the natural bark of local trees like almond, mango and mahogany, as well as an edible native fruit that yields an incredible purple gray, almost taupe, color. In the rolling Amazon hillsides, indigenous farmers have cultivated Pakucho naturally pigmented cotton for many centuries. However recent incursions of foreign cocaine drug cartels have forced many innocent farmers to replace native Pakucho cotton with coca leaf that is later converted into drugs that stupefy users while destroying the family farms and household economies.

Since 1993 our Drug Free Cotton Project has sought to restore the cultural balance and security by offering fair and consistent prices for Pakucho cotton, now recovered by hundreds of indigenous families 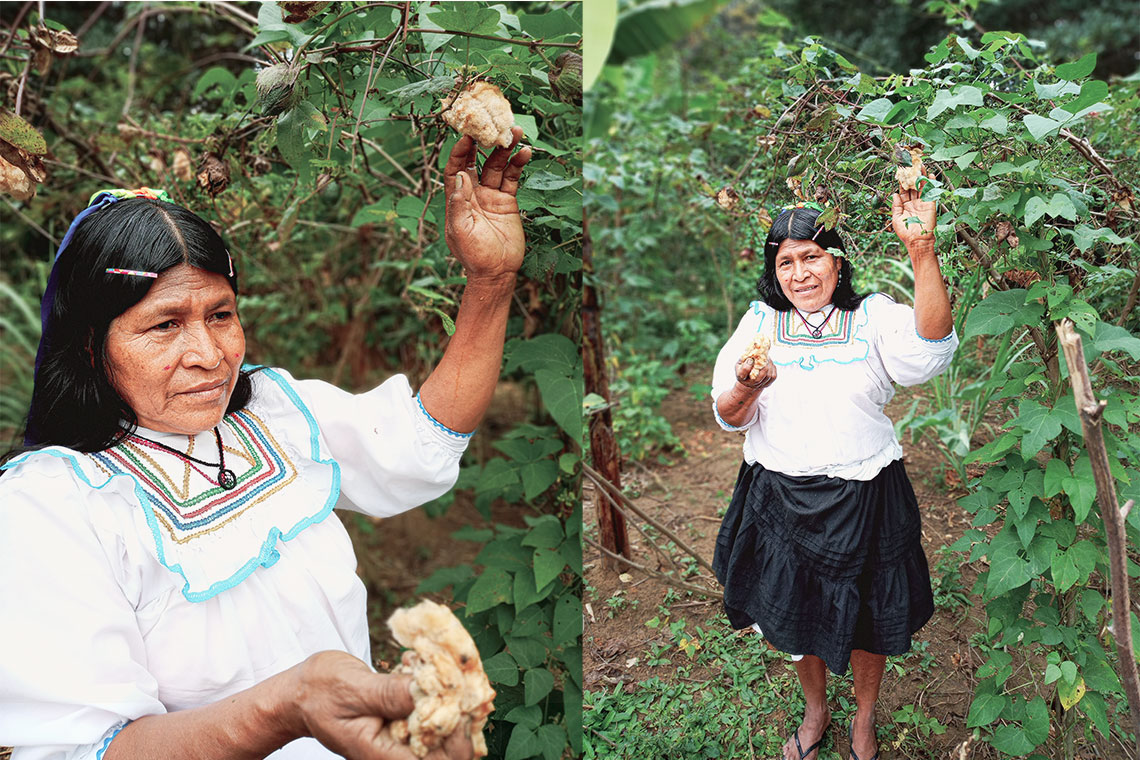 Although baptized with a North American Indian name, Pima, the genes actually came from somewhere in Peru 5 centuries ago, the home of Native Cotton! Our research team was able to trace the trail of native cotton from the Western coast of South America to Western Africa, north to Egypt and then back across the ocean to Pima County Arizona where it got its name at the beginning of the 20th century.

For decades Pima Cotton has been synonymous with the longest, finest and most lustrous of cotton fibers, used in high fashion and high street apparel by top brands and manufacturers around the world. In 1922, a well-known hacienda owner travelled to Pima county and returned to Northern Peru to plant the seeds on his vast farmlands on the desert coast. Much to his surprise, this “Pima” cotton proved marvelously productive and far superior to other commercial cottons at the time. But it’s no surprise that “Pima” was preadapted as it originated from similar shores before embarking on a 4-century journey around the world.